THE BOARD OF DIRECTORS OF THE DEFENSE FORUM FOUNDATION

Ambassador J. William Middendorf, II, has been Chairman of the Defense Forum Foundation since 1988. He previously served as the U.S. Ambassador to the European Communities from 1985-1987; Ambassador to the Organization of American States from 1981-1985; Secretary of the Navy from 1974-1976, and Ambassador to the Netherlands from 1969-1973. In 2002, he received the Maritime Security Lifetime Excellence Award. 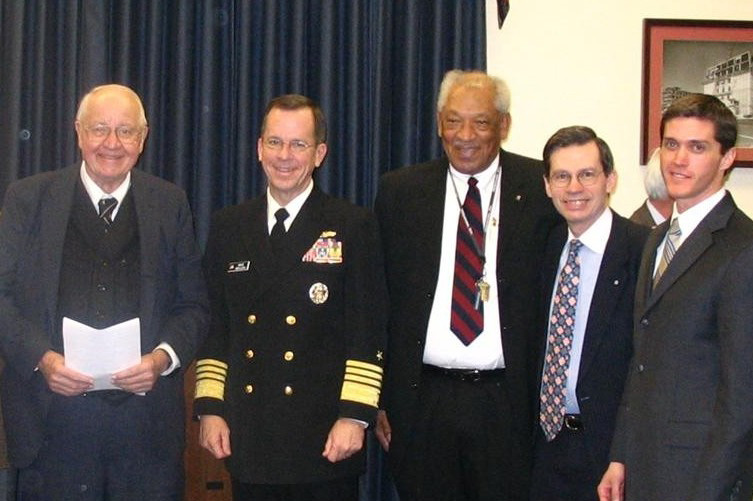 Middendorf helped start the Marine Corps Marathon and the trophy is named in his honor. He is also a composer and artist and has written a number of symphonies and over fifty marches. In addition to serving as Chairman of DFF, he also serves as a trustee for the Heritage Foundation and on the Board of the International Republican Institute. He served in the U.S. Navy from 1944-1946 in the Pacific Theater. 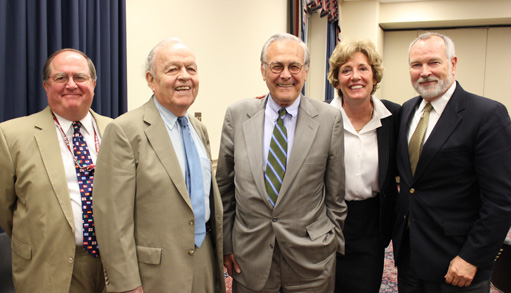 Suzanne Scholte has been President of the Defense Forum Foundation since 1989 and was one of its founding Board members. She formerly served as Chief of Staff for former Congressman Mac Sweeney of Texas and was the youngest Chief of Staff on Capitol Hill at the time. Scholte is the recipient of the Seoul Peace Prize (2008) and the Walter Judd Freedom Award (2010) in recognition of her advocacy for freedom, democracy and human rights abroad. Scholte is also a Founder and Chair of both the North Korea Freedom Coalition and the U.S.-Western Sahara Foundation. She is the Honorary Chairman of Free North Korea Radio and the North Korea People’s Liberation Front and a Vice Chair of the Committee for Human Rights in North Korea and a Board member of Christian Solidarity Worldwide-USA.

R. James Woolsey is Chairman of Woolsey Partners LLC and a Venture Partner with Lux Capital Management. He also chairs the Board of the Foundation for Defense of Democracies and is a co-founder of the United States Energy Security Council. Mr. Woolsey previously served in the U.S. Government on five different occasions, where he held Presidential appointments in two Republican and two Democratic administrations, most recently (1993-95) as Director of Central Intelligence. Mr. Woolsey currently chairs the Strategic Advisory Group of the Washington, D.C. private equity fund, Paladin Capital Group, chairs the Advisory Board of the Opportunities Development Group, and he is Of Counsel to the Washington, D.C. office of the Boston-based law firm, Goodwin Procter. In the above capacities he specializes in a range of alternative energy and security issues.

JEB Carney, Board Member, is Chief Executive Officer of News Information Management Services. A marathon runner, he organized the first international marathon between the three major refugee camps of the Sahrawi people. He has served as the Executive Director of GOPAC, President of both the Concord Group and the National Leadership Council and worked with former Senate Majority Leader Bob Dole and the Senate Majority Leader's Joint Trust.

Admiral James L. Holloway, III (USN, ret.), Board Member, retired in 1978 as the twentieth Chief of Naval Operations after thirty-nine years of active service in the U.S. Navy. He currently serves as Chairman Emeritus of the Historic Annapolis Foundation, Chairman of the Naval Historical Foundation, Chairman of the U.S. Naval Academy Endowment Trust, as well as a Director of the Olmsted Foundation and a Trustee of the George C. Marshall Foundation. He served on the Commis­sion on Merchant Marine and Defense and on the Defense Commission on Long Term Integrated Strategy. From 1981 until 1988 he was the President of the Council of American-Flag Ship Operators.

Chadwick R. Gore is the founder of DFF and a member of the Board of Directors. He currently serves as a Joint Interagency Training Specialist for Camber Corporation. He previously served as a Staff Advisor and as the Communications Director for the Commission on Security and Cooperation in Europe (CSCE). He has served as Senior Human Rights Advisor at the Department of State and a Senior Policy Advisor at the United States Information Agency. He is a Vietnam Navy veteran.

John Mucci serves as the Treasurer of the Defense Forum Founda­tion. He is the President of Mission Group Kansas, Inc., a 501(c)3 non-profit company that provides post-secondary training, and ­an expert in federal regulations pertaining to Federal Financial Aid. He is a veteran of the United States Coast Guard where he served as a communications specialist.

Chistopher T. Craig of Cook, Craig and Francuzenko serves as the Corporate Counsel for DFF.

Rubino & McGeehin serve as the Certified Public Accountant for DFF.