They took me to a public execution. North Korean describes how he escaped from the death train

Jana Václavíková
December 2, 2022
(Translated Interview)
The first culture shock experienced by Kim Seong-min when he escaped from the DPRK to South Korea was related to the wide range of food and drink. In the late 1990s, North Koreans, recovering from famine, could only dream of it. 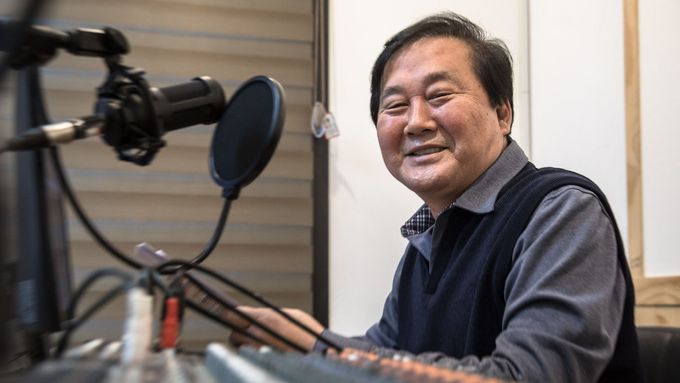 Kim Seong-min. | Photo: Jakub Plíhal
From our special reporter - When Kim Seong-min describes his former life in North Korea to Aktuálně.cz reporters in Seoul , he does not give too many details. He was born into a poet's family and was the only son, so he also wanted to become a man of letters, following his father's example. Because military correspondents received the most respect, he remained in the army after the mandatory military service.
At that time, he only knew about the southern neighbor what the propaganda told him, which as a correspondent he himself helped to create. At the same time, however, he noticed the shipments of leaflets and other goods that sailed from the South to the North Korean shores and which the army seized. "I saw a flyer with a North Korean soldier and a South Korean woman riding an elephant together. There was also a small calendar that said 'Go for freedom.' I didn't know exactly what freedom was, but I thought it has to be somewhere," he recalls.
He also heard other information from the radio, which he confiscated from his position as an officer and then listened to every day. "Leaflets alone cannot win over propaganda, but when you get into a situation where you have to make a decision, the importance of even these small things increases," he believes. For him, this decision became an incident in his crew, when his colleagues accused him of bringing leadership. He decided to run away.
His journey to freedom eventually took three years and led through China, where after a few days he was arrested and interrogated when he did not want to reveal his true identity. "I did not experience much torture, but when they were not satisfied with the result, they beat me. I was afraid that if I continued to lie, I would probably die. When I told them my real name, the decision was made to publicly execute me," says Kim Seong- min.
Escape from the train
The execution was to take place in the North Korean capital of Pyongyang, where even in the 1990s it took several days to travel by train from China. Kim therefore decided to do whatever it took to survive. He began to practice releasing himself from the shackles he was wearing all the time. He only got to this in the evening, when the train went dark without lights and his three guards, who also went to the toilet with him, could not follow his every move.
He was also thinking about where to run . "The trains in the Czech Republic, USA and Japan are different than in the DPRK, where the windows have wooden frames," he says, adding that he wanted to use the toilet window to escape. "There was no cleaning on the train, so after three days it was so dirty that the policeman didn't even want to go there with me anymore. I realized that this might be my only chance," he describes with his hands pressed together as if he had handcuffs "It only took a few seconds. I hung onto the beam and kicked out the window. I still have a little scar on my hand from that," he reveals. Before he could stop the train, he broke free of his handcuffs and ran. 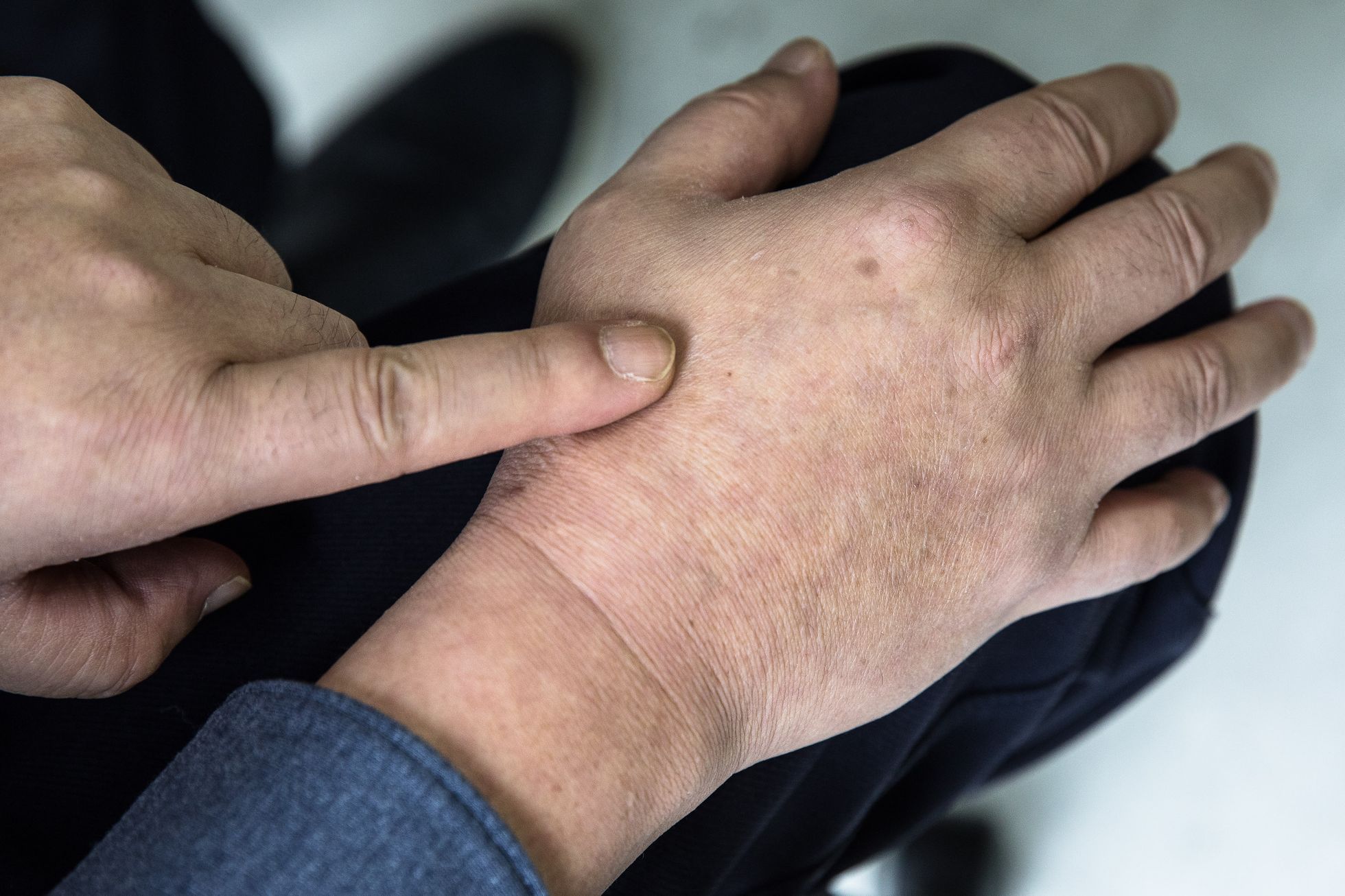 North Korean fugitive Kim Seong-min was left with a scar on his hand after the handcuffs were removed. | Photo: Jakub Plíhal
It was evening and all he could see in the surroundings were the lights of a nearby village, a field and a steep rock. Although it was slippery, he tried to climb as high as possible. Soon he could see the approaching lights from the flashlights and hear the voices of his guards. "If they'd just picked up the flashlight, they probably would have found me. But they didn't," he says, describing how he managed to escape from the train to certain death.
Why take North Koreans to the zoo?
After arriving in Seoul, like any refugee from the North, he had to undergo an investigation that lasted a whole year due to his army background. "I said that even as a soldier I stole to survive. I hardly even put on a uniform because I was just writing, so I didn't know much about the army. They didn't even believe I was there," he laughs.
Life in South Korea was so different for him that everything surprised him. "When I first got here, they put Sprite, Coca-Cola and also a rice drink in front of me. I didn't know that from the DPRK. I asked: How many kinds of drinks do you have here? The man who interrogated me told me that every day a year's worth of investigation can bring me a different drink," he recalls. "When they took me out to an internet cafe after a few weeks, the first thing I looked for was drinks in Korea," he says enthusiastically even after more than twenty years.
Another of his first memories from his free life is related to food and drink. "I ate my first banana in South Korea. We also had them in the DPRK, but they were from China and rare. Then I went to the Seoul Zoo and saw a monkey eating a banana! I almost went crazy! I realized that being an officer in the North Korean army is worse than being a monkey in South Korea."
Now he says if you want to change the people in North Korea, take them to the zoo. "When they see them eating monkeys, it will change their lives," he believes, explaining that all three Kims , the leaders of the DPRK, betrayed him. "It is crucial for their survival that people believe that they have heaven on earth, which the United States wants to take away from them. This is how they defend the production of missiles and nuclear weapons," he thinks.
Radio Free North Korea
Kim Seong-min began to speak publicly about the problems in his native country, he met with several world politicians and three times also with the former Czech president Václav Havel. But he became one of the most famous North Korean refugees thanks to his activities focused on ordinary North Koreans who still remain in the country. Since 2004, he has been running the radio  station Free North Korean Radio, which informs about events in the South, spreading the stories of refugees and also messages from foreign politicians. 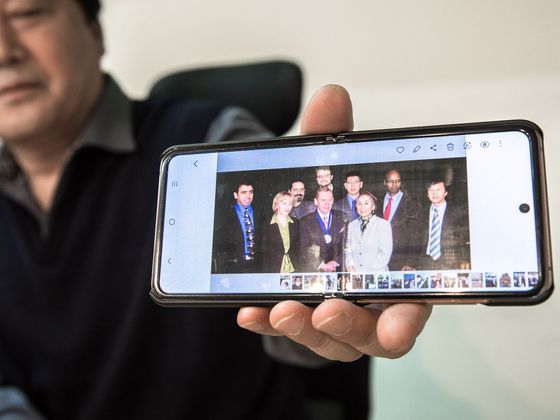 Kim Seong-min still has the memory of his meeting with Václav Havel on his phone. | Photo: Jakub Plíhal
Due to threats, the editorial office has already had to move three times, and the current studio is located in an unmarked office in a building that can only be accessed with an escort. In addition to the four employees, all refugees from the DPRK, who broadcast for one hour twice a day in the morning and in the evening, there are also two non-uniformed policemen. Kim received protection years ago, when the security forces detained several North Korean assassins in Seoul , who were tasked with killing him.
"In 1999 I came here looking for freedom. In 2004 I started broadcasting and since then I have no freedom. He goes with me everywhere, even when I go to the hospital, to the sauna, to the office," he says.
His radio lives on donations, most of which come from the United States, primarily from the  Defense Forum Foundation . "The North Koreans see no other option. We give it to them," says its director Suzanne Scholtová, who has been advocating for the human rights of the people of the DPRK since the 1990s. "I absolutely believe that there are people who want the peaceful unification of both Koreas. That's why they should know that they have partners in South Korea, the United States, the European Union or Japan," he adds for Aktuálně.cz in a telephone interview.
Original Interview here